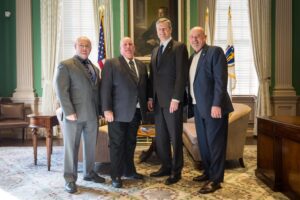 The meeting, which included the Governor’s Legislative staff, was an opportunity for the NEPBA to present its’ Legislative Agenda for this Session.

This was an hour long, frank and open discussion as each Bill, sponsored or supported by the NEPBA, was presented.

The meeting concluded with a Thank You to the Governor for his hospitality and his continued support of Law Enforcement and NEPBA members across the Commonwealth.